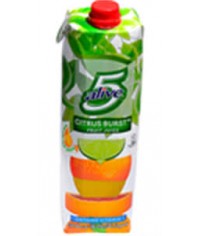 Line extension is one of the marketing old strategies and Coca-Cola Nigeria has been doing a good job out of it. Eva Water and perhaps Sprits stand could be said are the only brands from the stable of the world’s leading soft drink company that has not been watered down.
In fulfillment of this tradition, Coca-Cola would be launching a new Stock Keeping Unit (SKU) of 5Alive named Pulpy at the Federal Palace Hotel in Lagos.
According to sources from the company the new refreshing drink is filled with real orange pulp (locally made in Benue State) in a PET bottle like never been seen before.
There has been a blip in fruit juice segment in recent time with Chi Group brands such as Chivita introducing new SKUs into the market.
Though Coca-Cola said competition is not the reason behind the new addition, 789Marketing investigations reveal that 5Alive brand which was number one some years ago has suddenly fell behind Chivita

Airtel wins Pitcher Awards for Advertiser of the Year Award

Blast from the past: The Industry Evening Summit 1 highlights step...