In line with its promise to give fans exclusive access to the Africa Magic Viewers’ Choice Awards (AMVCA), Amstel Malta granted exclusive front row seats and backstage access to their Fan Reporter Bamishe Orafidiya, the winner of the fan reporter contest, at the 7th edition of (AMVCA).

The fan reporter contest was a highly competitive Instagram-video-entry style challenge that had a host of aspiring red carpet reporters trying to prove their viability.  The entry call began in February and the winner was announced on March 10.

Bamishe’s Fan Reporter experience kicked off as soon as she arrived at the event venue. After getting lightly dolled up, she officially began her reporting duties with a series of heartwarming, vlog-style interviews, where she caught up with celebrities and award nominees like Toni Tones, Swanky JKA, and Dakore Egbuson as they glammed up for the red carpet. Following this, she took a break so as to get ready for the red carpet herself.

Dressed in a barely sweeping, off-shoulder red dress designed by Bandela, and even more stunning make-up, she spent the red carpet session speaking with and to guests, nominees and top industry players in the ranks of Timini Egbuson, Kemi Adetiba, Toyin Abraham and Blossom Chukwujeku. The fan reporter spent the rest of the night networking and enjoying what was nothing short of an iconic award night.

Talking about the experience, Bamishe who is a final year student of Covenant University and an aspiring OAP with Hebron F.M, considered it an opportunity to live out one of her wildest dreams which was precisely what she needed to give her career a boost.

“I never imagined that I would be interviewing some of my favorite T.V stars,” she said. “I feel very lucky and excited to have been chosen. Amstel Malta literally gave me a lifetime opportunity on a platter of gold. It’s heartwarming to know that my career is about to take a positive turn and I am looking forward to doing more from here on.” she continued.

The Fan Reporter challenge was one of the many initiatives created by Amstel Malta to bring fans closer to the event. 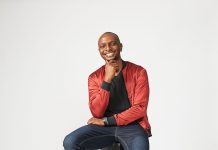