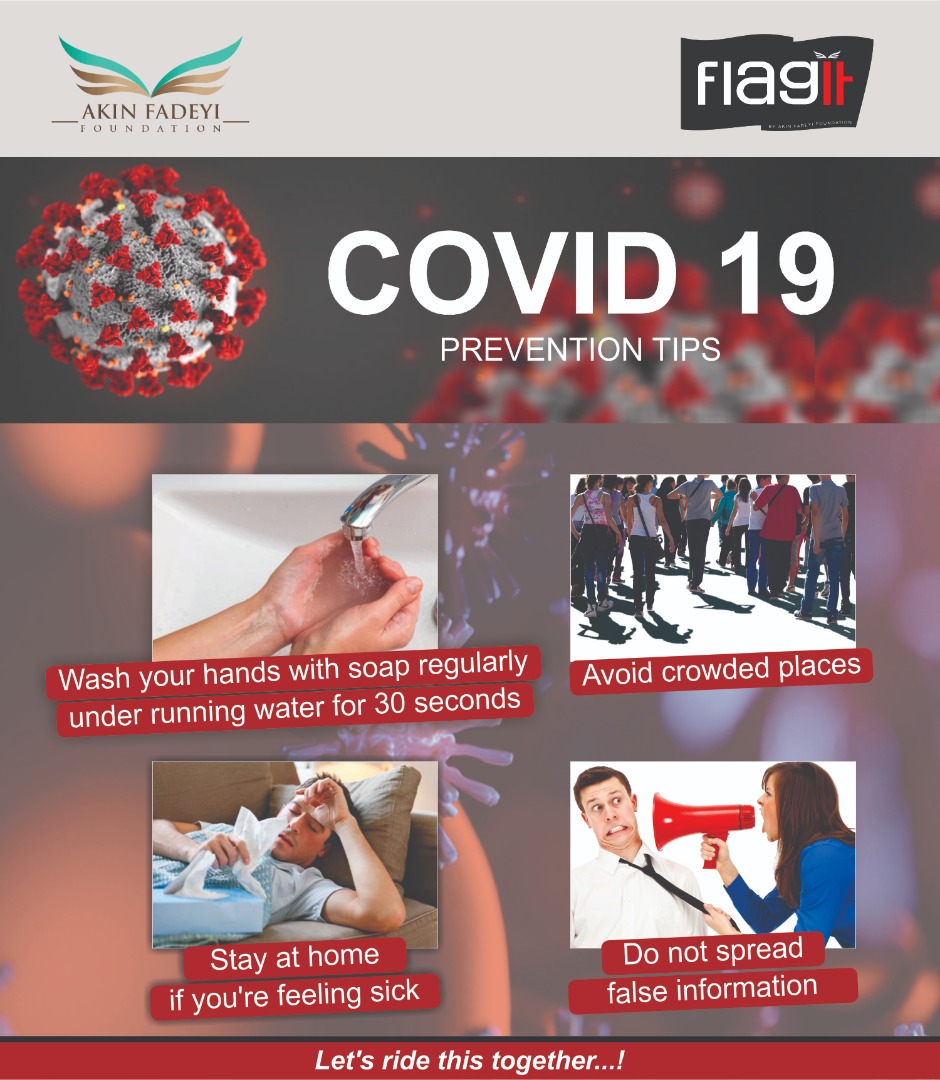 The Akin Fadeyi Foundation, conveners of the Corruption, Not in My country Project have called on all religious, political and traditional Institutions to adhere to the government and World Health Organization’s directive on the restriction of all religious and political gatheringsare strictly adhered to.

In a statement signed by the Organization’s Founder and ED, Akin Fadeyi, ‘’The rate of infections and tragic mortalities around the globe has underscored such compelling needfor all of us to yield to government directive’. He added, ‘irrespective of ourcountry’s level ofcoordination, surveillance and critical preparedness, as citizens, we still have a huge role to play within our communities to ensure the prevention or reduction of human-to-human transmission. This will not only protect us;it will also reduce the pressure on our nation’s health workers who are staking everything on the front-line to keep us alive”.

Fadeyi said, COVID-19 death toll has been on the rise across the world, necessitating travel bans and border closures. For the first time since after the second world war, the whole world is facing an anomalous challenge containing the deadly COVID-19. The virus was declared a pandemic by the World Health Organization following the high number of reported cases in China, Italy, Iran, Spain, Germany, S. Korea, France, US, UK and other countries, with a current record of over 8,000 deaths and 219,000 reported cases.

Following the most recent report issued by the Nigerian Government, there’s a total of 12 confirmed cases in the country. To this end and as a preventive measure, the federal government has issued a travel ban on the US, UK and 11 other countries, whilst schools are also being shut down. Nonetheless, Nigeria’s Centre for Disease Control (‘NCDC’) has developed a new guideline for people to stay in self-isolation. In the guideline called the ‘Self Isolation Guidance for Nigeria’, citizens returning into the country especially from China, Japan, Italy, Republic of Korea, Iran, France, Germany, and Spain are advised to adhere strictly to the 14 days self-isolation rules to prevent further exposure or spreading of the disease to other members of the society.

However, if religious and political gatherings are still being observed unabated, Nigerian citizens and indeed foreigners amongst us would be vulnerableto the risk of infection, at a time where even the best scientist in the world are still grappling with straws to find a cure.

We commend the NCDC for its timely release of information and efforts since the outbreak of COVID-19, even as we acknowledge their possible challenges in the face of infrastructural shortfalls in our healthcare system.

While the Akin Fadeyi Foundation would like to convey its heartfelt wishes to all currently affected by the COVID-19 virus and wish them a speedy recovery,we urge our fellow citizens not to panic, but to thoroughly adhere to the World Health Organization’s protocol for prevention, which includes consistent handwash with soap under running water for 30 seconds, social distancing, and avoidance of crowd, sneezing and coughing into elbow, and by all means, quickly reporting symptomatic signs to authorities concerned.

As a Foundation and with support from our funders, the McArthur Foundation, we shall soon be rolling out audio-visual messages on social media and TV in furtheringconsistent and robust messaging that enable us all to exercise caution.

Do You Remember This Time?

Lagos and the open graves no one is talking about