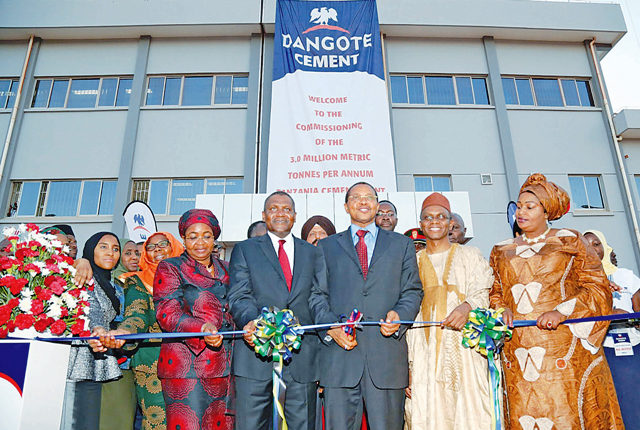 Management of Dangote Cement has revealed that its Pan African sales increased by 2.7 per cent to nearly 4.7 million tons for the six month ended on June 30th 2019.

To the delight of its investors, the company also revealed that its Tanzania Plants now runs on gas turbines, just as sales volumes from its Senegal Plants are more than 100% of its rated capacity.

All in all, these surely are good signs of better days ahead for the company’s investors. It would be recalled that the company paid a whopping N272.6 billion as dividends to its shareholders last financial year, translating to N16 per 50kobo share,, an increase of 52.4 per cent against total dividend of N178.9 billion or N10.50 per share paid by the company for 2017 financial year.

Chairman of the company, Aliko Dangote had recently said its cement terminals in Lagos State and Onne, Rivers, would be concluded before the end of 2019, as a way of further improving its market share.

He promised that the terminals, which were delayed by equipment suppliers, would rake in about $700 million in foreign exchange through cement exportation to sub-Saharan Africa.

He said the company would be opening export facilities within the terminals to export clinker and cement to its existing facilities both in Cameroun and other African countries.

According to him: “Later in 2019, we will open export facilities in Lagos and Port Harcourt that will enable us export clinker initially to our grinding facility in Cameroun and then to new grinding plans we are building in West Africa…Not only will these generate useful foreign currency for Dangote Cement to support other expansion projects outside of Nigeria, they will also help to increase the output of our Nigerian plants,” he said.

He further revealed that the company would be exporting cements through the terminals to Ghana, Cameroun, Sierra Leone and Congo, among others and as such make Nigeria the biggest exporter of cement in sub-Saharan Africa.

Noting that the project will improve job creation and increase prosperity of the country, he said the company’s capacity will also increase on the completion of the terminals.

Dangote Cement is Africa’s leading cement producer with nearly 46Mta capacity across ten countries in Sub-Saharan Africa. A fully integrated quarry-to-customer producer, it has a production capacity of 29.25Mta in Nigeria. Its Obajana plant in Kogi state, Nigeria, is the largest in Africa with 13.25Mta of capacity across four lines; its Ibese plant in Ogun State has four cement lines with a combined capacity of 12Mta, while its Gboko plant in Benue state has 4Mta.

Through its recent investments, Dangote Cement has eliminated Nigeria’s dependence on imported cement and has transformed the nation into a net exporter, serving neighbouring countries that lack the limestone necessary for cement manufacturing.

Growing your business has never been easier

Buharinomics And The Hedonistic Calculus

Lifting over 80 million Nigerians out of poverty is our priority...