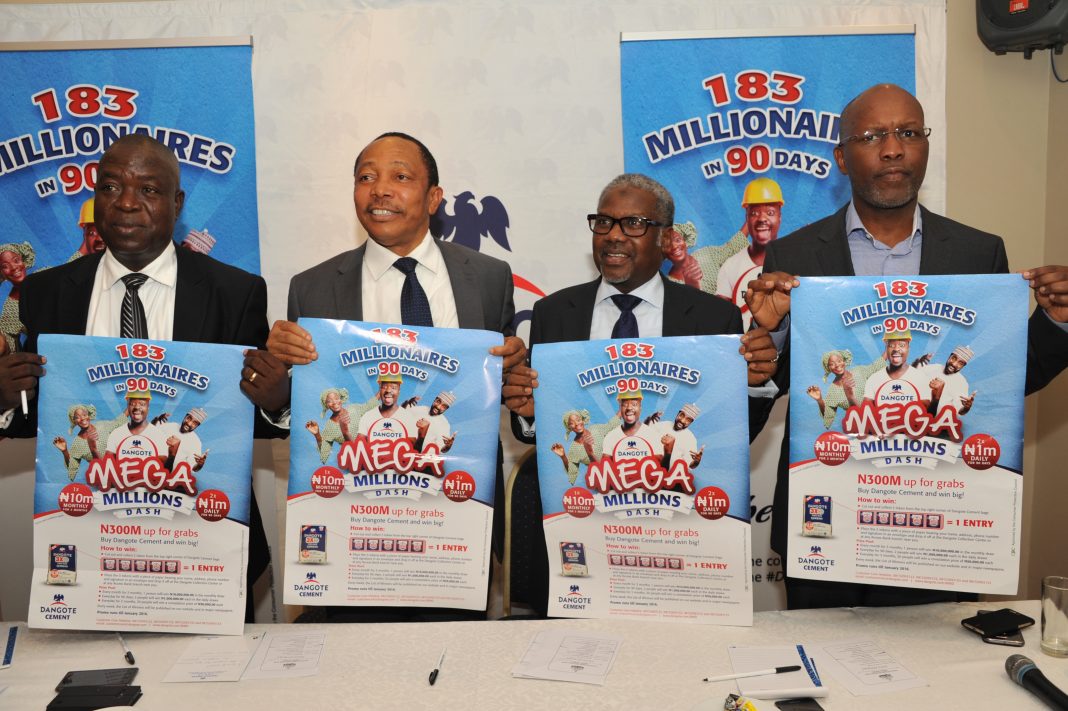 Africa’s largest cement producer, Dangote Cement plc has announced a Profit Before Tax (PBT) of N162.90 billion for the six months ended June 30, 2020 even as two block makers have emerged winners in its ongoing Spell and Win a million national consumer promo.

According to the unaudited results of the company released on the floor of the Nigerian Stock Exchange (NSE), the declared profit was 4.7 per cent higher than N155.49 billion in the corresponding period of 2019. The results indicate a resilient half-year 2020 performance despite the impact of COVID-19.

The Group revenue went up to ₦476.9 billion, Group Earnings before interest, taxes, depreciation, and amortization (EBITDA) was ₦218.1 billion representing a 45.7 per cent margin while Pan-Africa EBITDA was up by 31.6 per cent to ₦31.5 billion; a margin of 21.7 per cent.

The period under-review saw the maiden clinker shipment from Nigeria via the Apapa Export Terminal to Senegal in June while plans are on track to ship more vessels of clinker to West and Central Africa in the second half of 2020.

Speaking on the results, Group Managing Director, Dangote Cement, Michel Puchercos, said: “I am humbled by the fact that we continue to be in a strong position despite the economic downturn that the world is facing due to COVID-19. Although April was greatly impacted by lockdowns and restrictions across our operations, we experienced a strong quarter. We achieved a record high volume and EBITDA margin in Pan-Africa of 4.7Mt and 21.7 per cent respectively. Group EBITDA was up slightly despite the impact of COVID-19.”

He added, “I am particularly pleased to announce that Dangote Cement shipped its first clinker cargo to Senegal from our new cement terminal in Apapa, Lagos. It has been a long journey for Nigeria, from being one of the largest bulk importers of cement, to being self-sufficient in cement production, and now an exporter of clinker.

“We are on track to ensure West and Central Africa are cement and clinker independent, with Nigeria as the main supply hub. We want to continue developing regional and continental trade between the ECOWAS countries and beyond.”

On the company’s measures against the COVID-19 pandemic, Puchercos stated, “We are committed to protecting our team members and communities by being fully compliant with health and safety measures. We remain focused on adapting to the rapidly evolving markets in which we operate. We continue to deploy our efforts to maintain our cost competitiveness while ensuring that our balance sheet is resilient.”

Barely a week after its launch, two Block makers from Lagos and Oyo States have become first star prize winners of N1 million each in the ongoing Dangote Cement Bag of Goodies Season 2 Consumer Promo.

The promo, which the management said was partly to reward loyal customers and ameliorate the impact of COVID-19 pandemic on consumers, offered the winners cash prizes apart from other commercial and household items, and it is expected to run from July 15 to November 15, 2020.

A block maker based in Lanlate, in Ibarapa East local government area of Oyo State, Ojediran Kayode Stephen, who emerged the first N1 million winner in the “Spell Dangote and be a millionaire” promo, said he got the winning letters from among the 500 hundred bags of cement, which he bought to make blocks for customers.

Apart from the N1million, Ojediran said that he also won several recharge cards and extra N2,000 in the promo.

On what he would do with his winnings, he explained that he is going to invest the N1 million to expand his block making business. Said he: “I am very happy for becoming one of the first sets of people to win in the Dangote Cement Promo. I intend to use the money to expand my business. I am going to buy more bags of cement to produce more blocks.

“I thank Dangote Cement company for organizing this promo in this era of COVID-19 and I believe the money will go a long way to reduce the pain of the pandemic in the country”, he added.

Another lucky winner, the Managing Director of Afolabi Adefila Block Industry, said that he has been a user of Dangote Cement since the inception of his business, which he started several years ago.

According to him, he buys over 300 bags of Dangote Cement weekly for his block factory located in Lagos. “I patronize only Dangote Cement. This money is timely, most especially during this era of COVID-19. Dangote has been doing a lot to ameliorate the challenges of COVID-19 on Nigeria. I am aware of what the company has been doing to reduce hardship in Nigeria. The promo is just an added effort to what Dangote has already done in terms of poverty alleviation”, he said.

Reacting to the news of the first winners, the Block Makers’ association Secretary, Mr. Aina said that he is excited that members of his association have emerged as the first set of winners of the ongoing Dangote Cement promo.

He described Dangote Cement as best in terms of quality, saying the promo would help improve the association’s members’ revenue. He lauded the company’s innovate efforts at producing the best products for building construction from the stable of Dangote cement.