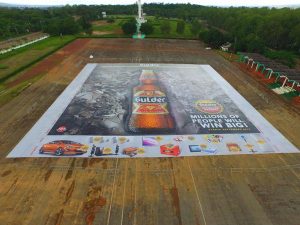 Nigerian integrated marketing communication (IMC) recorded another first in the global arena when largest advertising poster was unveiled in Enugu by Gulder, a beer brand from the stable of Nigerian Breweries Plc.
The World’s biggest poster measuring 5,367 square metres unveiled at the Michael Okpara Square in Enugu State broke the record for the existing largest poster measuring 4,793.65 square metres, which was displayed in India on June 27, 2015.
The size of the poster was attested to by a chartered quantity surveyor Nath Agu, while a lawyer, Onyekwuluje Ogochukwu, , legally affirmed the measurement and size.
The Gulder poster served to kick-start the 2015 edition of the Gulder National Consumer Promotion.
The Governor of Enugu State, Ifeanyi Ugwuanyi, was represented by the Commissioner for Commerce and Industry, Sam Ogbu-Nwobodo commended the Gulder brand for the feat. He said: “Indeed, this is a very momentous feat and I applaud Nigerian Breweries Plc, makers of Gulder for choosing Enugu as the take off point for this milestone event. Enugu has also been one of the most lucrative tourist destinations for businesses. By implication, Enugu will also be in the Guinness book of world records for hosting this event. In Enugu, there is a continuous drive from government to provide adequate security for forward-thinking companies like Nigerian Breweries.”
Since its unique launch in 1970 as Nigeria’s first lager brand packaged in a brown bottle, Gulder has blazed the innovative trail, achieving milestones in the process.
The brand organized Nigeria’s first reality TV show, the Gulder Ultimate Search, while Gulder’s current packaging, is regarded as Nigeria’s most innovative bottle.
The Managing Director, Nigerian Breweries Plc., Nicolaas Vervelde, recounted Gulder’s momentous stride in the beer market and the company’s choice of Enugu as the rallying point. He stated that ‘‘since the commissioning of our second brewery in Aba in 1957, the South East has been a solid base for our operations and a veritable home to our brands. It is in continuation of this robust relationship with the South East that we are here in Enugu courtesy of Gulder the ultimate lager beer’.
Describing the largest poster as “The Gulder Ultimate Poster”, Vervelde said the feat recently achieved by Gulder is “an attestation to the Ultimate beer and the Ultimate Man who stands up to be counted with his beer.” Speaking further, he described Gulder’s feat as a glowing testament to Nigerian Breweries commitment to winning with Nigeria. He added: “This commitment covers all aspects of our investments, our footprint, our people and our socio-economic impact. As Nigeria’s leading brewing company, this feat showcases Nigeria Breweries Plc’s continuous commitment to expanding the frontiers of consumer promotion in the history of Gulder with over four million prizes to be won.’’