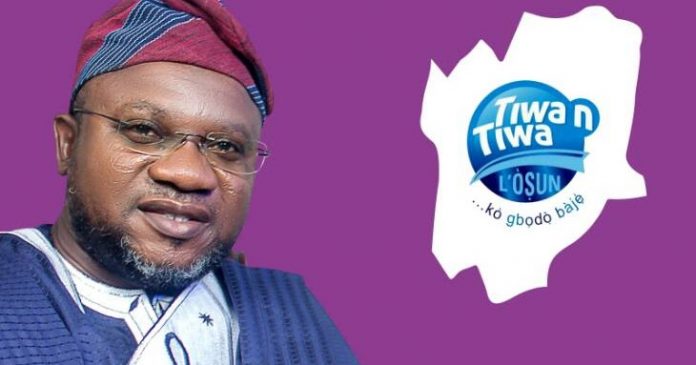 An aspirant in the 2018 Osun governorship election under the All Progressives Congress (APC), Mr ‘Kunle Rasheed Adegoke (K-Rad) has dragged the Advertising Practitioners Council of Nigeria (APCON) before the Federal High Court in Osogbo in a suit marked FHC/OS/CS/39/2018.

The advertising practitioners’ regulatory agency had in May 2018 posted removal notices on his campaign posters in the state, to which he responded by a letter through his lawyers, protesting what he regarded as defamatory and an advertisement of his person to the whole world as a debtor and irresponsible law breaker.

However, when 789marketing reached out to APCON, the corporate affairs manager of the council, Ms. Maryam Confort Nor said, “We have not received any summon from any quarter. Our legal team has debunked it.”

Nor stated that whenever the summon gets to the Council, the council; will respond appropriately.

The protest letter was however followed by outright removal and confiscation of the campaign banners in July 2018. In reaction to this, Mr Adegoke has now instituted a court action against the regulatory body, through which he is asking the court to determine:

– Whether the Defendant has the powers under the Advertising Practitioners (Registration Etc.) Act to control and/or regulate the activities of, and/or sanction non-APCON members who do not carry on the business of advertising as a profession but whose advertisements are sourced out to advertising practitioners.

– Whether the Defendant can prescribe or impose penalties for alleged commission of offenses that are not contained in any written Law.

– Whether the Defendant can enforce a penalty for the alleged violation of any law upon the Plaintiff who is not a member of the Defendant’s professional association without a judicial interpretation of such laws by way of order/judgment of a competent judicial body.

– Whether the Defendant can lawfully order the Plaintiff, by a public notice, to remove his property from a public place without a prior opportunity of fair hearing and/or a valid court order to the effect.

– Whether the Defendant’s act of defacing, subsequently removing, confiscating and carting away the Plaintiff’s political campaign banners from public places without any valid order of a competent court of law is not unlawful, ultra vires its powers, null and void.

Upon the determination of the above legal questions, the politician, who himself is a barrister and solicitor of the Supreme Court of Nigeria, is praying the court for nine different sanctions against the advertising regulatory body, including an award of N100, 000, 000.00 (One Hundred Million Naira) as general and aggravated damages.