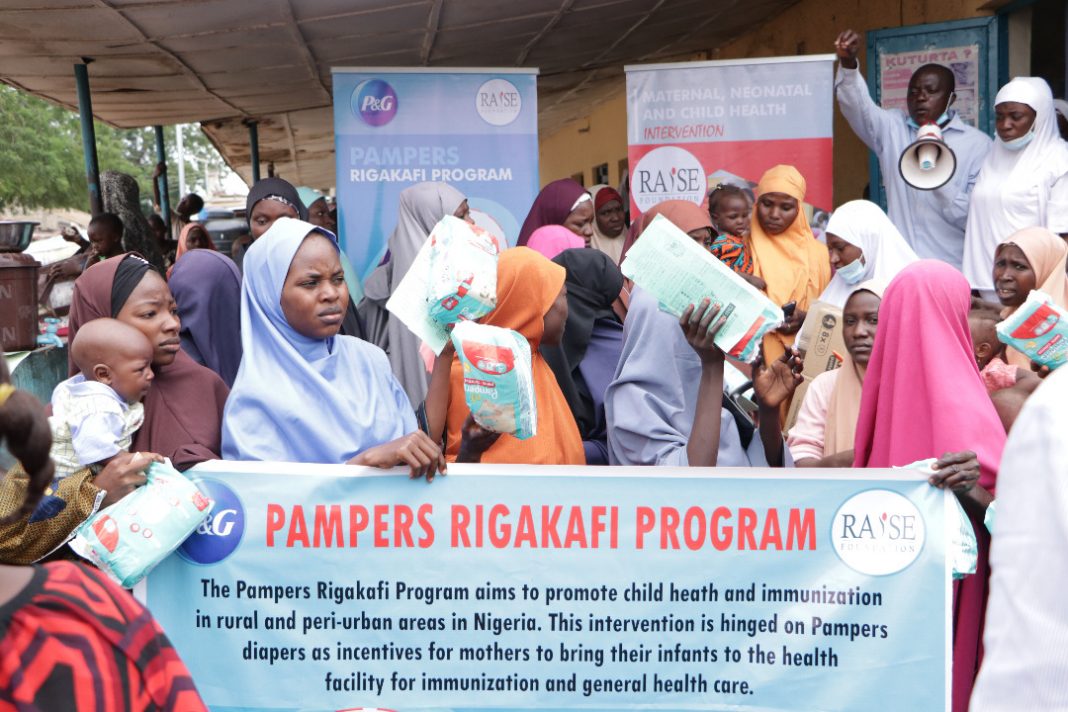 One of Nigeria’s consumer goods companies, Procter & Gamble P&G has recently launched its Pampers Rigakafi III program through a partnership with the Tabitha Cumi Foundation (TCF) to reduce infant mortality and increase immunization rate in Nigeria.

Through this initiative, Procter & Gamble donated over 180,000 Pampers® diapers to support the TCF’s ‘Help Mama Keep Baby’ project which promotes maternal and infant health in hard to reach communities in Nigeria.

This announcement was made official at the handover of the Pampers® diapers to the TCF management during a brief ceremony held recently in Abuja. In attendance were representatives of the FCT Health Secretariat, Bwari Area Council HOD Health, Matron of the Primary Health Care Centre, Members of the TCF Board of Trustees, TCF Staff, and other notable representatives of relevant organizations.

Under the Pampers® Rigakafi program, which was launched earlier this year, P&G has donated over 2.5 million Pampers® diapers to the federal and state governments including ministries of health, ministries of women affairs, and the National Primary Health Care Development Agency (NPHCDA). In line with the company’s commitment of being a force for good in the communities, this program was launched with the aim of impacting health outcomes of thousands of infants and mothers in participating communities. The Pampers® diapers will serve as incentives for mothers to bring their babies to the hospital for immunization and general health checks.

Speaking on this initiative, the P&G Senior Director for Africa, Global Government Relations and Public Policy, Dr. Mrs. Temitope Iluyemi said: “We are a force for good and are committed to improving the lives of people in the communities where we live and work. The third phase of the Rigakafi program builds on the very successful models from our first and second phases which involved partnerships with the state and federal governments to improve infant health outcomes.”

“With this partnership with TCF, a non-profit, we hope to further intensify the impact of our intervention on infant health – most especially in hard-to-reach areas. The donation of over 180,000 Pampers® diapers to TCF’s ‘Help Mama Keep Baby’ project will drive increased immunization, ante-natal and post-natal care within the rural and peri-urban communities of the FCT, Niger, and Nasarawa states.”, Dr. Iluyemi added.