It said until this appointment, Olusinde, who joined the company in 2006 as the Head, Legal/Claims, served as the General Manager, Legal Services.

According to a statement from Sifax, Olusinde holds a Bachelor of Arts degree in History from the Obafemi Awolowo University, Ile-Ife; Bachelor of Law degree and Masters of Law degree from the University of Lagos, and was called to the Nigerian Bar as a Solicitor and Advocate of the Supreme Court in 2000.

“He has attended several courses, seminars and workshops in insurance, taxation, shipping, arbitration and law, both within and outside the country,” the statement read in part.

It quoted the Group Managing Director, Sifax Group, Mr Adekunle Oyinloye, as saying that the decision of the company’s board of directors to appoint Olusinde was a strategic one based on his strong work ethics, dedication, commitment and high-level skills, which he had displayed convincingly in the course of duty. 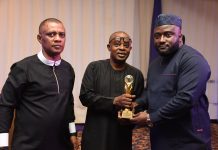 Dangote says “Sometimes it is just a matter of communication”