Oracle Experience, a foremost brand activation agency has again been reaffirmed as the most creative and best in interpreting clients’ briefs at the 2015 Marketing World Awards (MWA) by winning 2015 experiential agency of the year.
The agency’s project for Nigerian Breweries- Star Bottle Tree and Gulder World Biggest Poster also won in brand activation of the year and excellence in marketing innovation category.
For Star Bottle Tree, this makes it second time in 2 weeks to win a major prize after being confirmed as the best experiential marketing campaign with the year under review at the Advertisers Association of Nigeria Awards for Marketing Excellence.
At the keenly contested category at the ADVAN awards, Star Bottle Tree defeated Nescafe Get Started, Star Music Trek, MTN Project Fame, Fayrouz L’Original Expression, Jaguar Landover Ride & Drive, Heineken House, Ranger Odyssey and Orijin Drum unveil to emerge the best for the year.
Oracle Experience, which was adjudged the best in its category at the 5th Marketing World Awards as result of its several groundbreaking activations between 2014 and 2015, competed against EXP and Brands Optima.
In the Excellence in Marketing Innovation, Nigerian Breweries’ Gulder World Biggest Poster, which was unveiled in Enugu some months ago pitched against Coca-Cola’s Share-A-Coke and MultiChoice’s DStv Explora Box office. Meanwhile Star Bottle Tree defeated Star Music Trek, Guinness’ Made of Black and Coca-Cola’s Coke Studio. 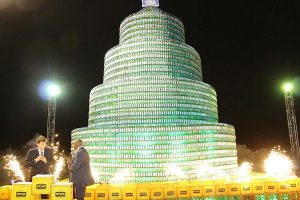 The World’s biggest poster measuring 5,367 square metres unveiled at the Michael Okpara Square in Enugu State broke the record for the existing largest poster measuring 4,793.65 square metres, which was displayed in India on June 27, 2015. The size of the poster was attested to by a chartered quantity surveyor Nath Agu, while a lawyer, Onyekwuluje Ogochukwu, , legally affirmed the measurement and size.
Oracle had won several awards in the past, including Nigeria Brand Awards 2015 as Best Experiential agency of the year Award – Gold category, MarketingEdge’s 2014 Outstanding Experiential Agency, Brand Journalists Association of Nigeria’s Brand Activation influencer with its Nescafe Hot Air Balloon campaign, 2013 Best Effort in Innovation, 2013 Polaris Excellence Awards, and 2011 Institute of Direct Marketing of Nigeria’s West Africa World Class Experiential Marketing Service Consultant.
The latest accolades come on the heels of Oracle’s world record breaking Christmas bottle tree with 8,000 bottles of Star beer bottle covering a 2.7 kilometre stretch. Prior to this, the world record was 1,000 bottles achieved in China.
Another feat was the Gulder crate tunnel using over 3,200 crates of Gulder beer to build the ultimate corridor that led to the place the new Gulder bottle was launched.
Other works by Oracle include Amstel Show Time, a musical presentation which was first of its kind in Nigeria, Heineken Green light party with extraordinary video mapping and using the Heineken bottles to create a selfie wall.
They also include the star triple X experience centre, the hot air balloon activation for Nescafe, Gulder club ultimate hosted in a 70-metre ultimate liner just like Titanic, and the sensational strongbow golden hour sensory experience..
King thanked the organisers and pledged the company’s determination to continue to improve and add value to clients’ businesses.

I was made to be the best ,and that’s what I live for. I sacrifice a lot everyday of my life and to be the best you have to sacrifice. All I have achieved I owe to God. Being crowned the best in the country is a gracious experience, but it is more rewarding when the experiences and the stories we tell live a lasting memories in the minds of the consumers we engage. We believe our client deserve the best, the consumers deserves nothing but the best. To give the best you have to be at your best!.
We have come a long way and the journey to success is not bread and butter, but that which is filled with great burden that involves sweat and blood.
I will tell you this,” there is no short cut to success, and there is never an end to the road of success. It is continuous journey, a journey filled with thorns and roses”.
You need to understand my story to understand why we do the things we do and why we are going to be here for a long time to come. “when you sell your wedding ring to raise 30,000 Naira to start a business then you will understand our motivation”. King says.
For some organisations, awards are periods for excitement but it is a time to reflect on our output and improve upon them. “We will continue to improve and add value to clients. Next year will be even more exciting.