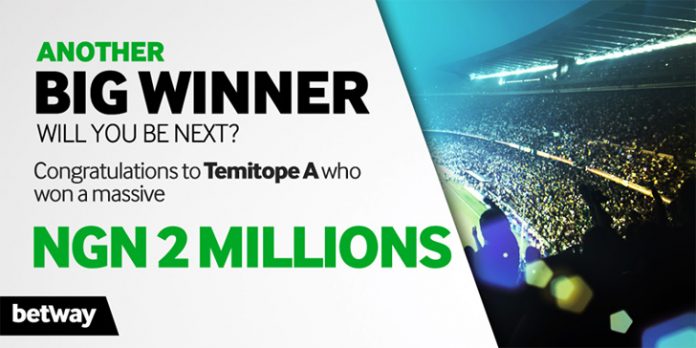 Another Nigerian, Temitope A. has won a massive N2 million by placing wagers in the just concluded Betway African Cup Of Nations Predictor Promotion.

Temitope, who also happens to be a school teacher and Arsenal FC Fan, is a player who usually waits for wagers with high odds before he plays.

Fortunately for him, his strategy worked. He was notified by Betway that he was at the top of the leaderboard of the Betway AFCON Predictor Promotion and had won N2 million.

Elated by the news, he wanted to scream but he was invigilating in an exam hall. Now, he plans to make good use of the money to start his own business and give back to his parents.

His plans also include his desire to continue betting on Betway.

“I deposited in my account yesterday. I am now waiting to select some good games for the new football season,” he added.

On his experience with Betway, he said, “Betway is one of the bookies with highest odds, a fast payout and swift customer care to assist bettors”. According to him, he had joined Betway in 2018 and believed in the platform over all other bookies.

In a conversation with Betway Country Manager, Lere Awokoya on Temitope’s victory, he says, “Betway prides itself on providing its customers with a bespoke, fun and informed betting experience, supported by a safe and secure environment. That is why many Nigerian bettors are interested in placing their wagers on the platform”.