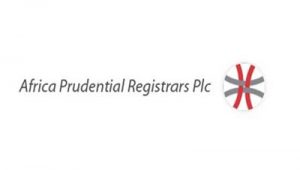 Africa Prudential Registrars Plc has proposed a final dividend of forty-three (43) Kobo per share to the delight of its shareholders. This final dividend rounds up to sixty (60) Kobo total dividend for 2015 financial year, having paid an interim dividend of seventeen (17) Kobo on August 31, 2015 after releasing its half year financial results.
The company’s audited results for 2015 which was released to the Nigerian Stock Exchange (NSE) last week shows a total of N1.2 billion will be paid to ordinary shareholders of the company if the proposed final dividend of 43 Kobo per share is ratified at the coming Annual General Meeting of shareholders.
If ratified by shareholders at the AGM, payment of the dividend will be made on April 13, 2016 to all shareholders on the register of members of the company as at the qualifying date of March 22, 2016. The Register of Members and Transfer Books of the Company would be closed from Wednesday, March 23 to Tuesday March 29, 2016 (both dates inclusive) for the purpose of updating Register of Members eligible for the dividend payment.
In the results released for the period ended December 31, 2015, the company recorded N2.54 billion gross earnings, representing a 15% growth from N2.20 billion in 2014. Likewise, the Profit Before Tax (PBT) for the period grew by 25% from N1.3 billion in 2014 to N1.6 billion in 2015. By the performance, expense only grew by a marginal 1% from N904 million to N913 million. In a similar trend, basic earnings per share grew by 18% — from 61 Kobo to 72 Kobo.
In an interview with the media, Mr. Peter Ashade, Managing Director/CEO affirmed that the company is focused on increasing shareholders wealth. In line with its five-year strategic plan, the company has paid dividend consistently for three years, following its listing on the NSE in 2013. Thirty-five Kobo dividend was paid per share in 2013 and
2014 financial years, while a total of 60 Kobo is being proposed for 2015, having recorded another impressive result.
While Mr. Ashade further encouraged investors to keep hope with the company as it sustains the tempo of impressive growth in the years to come, it would be recalled that APR Plc won a double award at the prestigious Pearl Awards in 2015. The company was announced winner and presented with the Best Profit Margin Ratio, and Best Corporate Governance Awards.