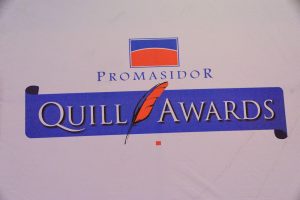 The 2014 and 2015 overall winners of the Promasidor Quill Awards, Kunle Falayi and Taiwo Alimi; respectively have advised journalists in different parts of Nigeria to ensure they upload their entries for the various categories of the awards before the April 14, 2016 deadline set for all prospective applicants to submit their applications.
The duo said journalists should not be carried away by the normal pressure from their daily routines but create time to package their entries for any of the seven categories of the Promasidor Quill Awards. The categories available for journalists to compete for this year are: Best Report on Children and Nutrition; Best CSR and Industry Report of the Year; Education Reporter of the Year; Best Photo Story of the Year; Future Writer of the Year; Brand Advocate of the Year; and Best Online Reporter of the Year.
Falayi said he was optimistic that the quality of entries that would be received this year for each of the categories would be higher than that of last year as the annual competition has endeared itself to the hearts of many journalists who aspire for foreign training available under the scheme.
According to him, any journalist who does not have quality write ups that could compete with others in any of the award categories could still work on that before April. “If they do not already have write-ups that are strong enough, they should go and write good stories; because I know it is really going to be tough this year. Every applicant for any of the categories this year will meet up with strong contender. I can only advise any journalist participating to do their best and submit the best of their works”, Falayi stated.

Speaking on the annual competition at the Media Briefing recently held at the Headquarters of the company in Isolo, Lagos, Mr. Olivier Thiry, Managing Director, Promasidor Nigeria Limited announced the addition of ‘Best Online Reporter of the Year’ category to the various categories of the awards. Thiry said the new category was introduced due to the steady increase in the interest shown in the Quill Awards by journalists in Nigeria and the persistent rise of interest of the people in new media.
Falayi said: “That Promasidor even added another category to the existing categories of the annual awards is an indication that the company is trying everything possible to sustain the high standard it has set for the media awards.”
According to him, this is part of the commendable efforts of Promasidor towards rewarding excellence in journalism profession in Nigeria. Falayi said Promasidor perceives the rewards it annually gives to journalists as something that should be maintained over a period of time for its impact to be felt on a reasonable number of people.
He therefore, advised prospective applicants this year to reciprocate the commitment shown by Promasidor by ensuring that they upload their applications within the period allowed. He assured them that they would benefit enormously from the awards particularly if emerged the overall winner.
Similarly, Alimi commended Promasidor for adding the ‘Best Online Reporter of the Year’ category, which he said would give many more applicants the opportunity to participate in the competition.
Alimi therefore advised prospective applicants: “They should go ahead and package their entries well. They should realize that Promasidor Quill Awards is the best media award in Nigeria today and that applicants will gain a lot from it.

We are excited that Dangote Refinery is in Lagos, says Sanwo-olu