Home Entertainment News/Hospitality KORA reappears in 2016, to be hosted by Namibia 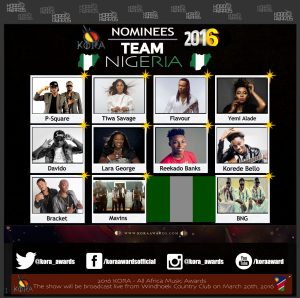 After a decade of absence in the music firmament in Africa, KORA All-Africa Music Awards, the African continent’s first award ceremony in the musical arts has announced the nominees in the 26 categories for its 2016 edition. The award ceremony taking place at the Windhoek Country Club in Namibia has partnered with Soundcity Africa as official Broadcast Media.
The Award Ceremony which is set to take place on the 20th of March 2016, and will form part of the host country – Namibia’s annual National Day celebrations would be televised live on SoundcityTV – Channel 327 on DSTV, GOtv Channel 75 and her digital platforms across 55 countries.
SoundcityTV delivers the very best of Culture, Music, Entertainment and Lifestyle to a worldwide audience, a fitting for the KORA All-Africa Awards.
“We are excited about the partnership to take the 2016 KORA All-Africa Award to 55 countries and to our over 40 million audience via the live broadcast and digital platforms,” said Mr. Tajuddeen Adepetu, who is Chief Executive at Consolidated Media Associates and Executive Producer at SoundcityTV Africa. “We are inspired by the incredible work of KORA team over the last 12 years and then by 2016 crop of nominees for the award. Next year’s ceremony would be nothing short of spectacular even to audience who would be tuned in from their homes via SoundcityTV.”
The Namibian government who would be playing host for the March 20th ceremony has thrown her weight fully behind the 2016 edition of the Award. In a communication recently issued by the Namibian Ministry of Environment and Tourism in conjunction with the Ministries of Education, Arts & Culture; and Information and Communication Technology, the Namibian government expressed the belief that the creative industries play a key role in contributing to the economy and in doing so, furthering the poverty alleviation agenda through tourism, the cultural arts and the creative industries which largely informed the partnership with the Organizers of KORA.
The statement from the Namibian government in part read: ‘These programmes are designed to ensure Namibian’s participation in this landmark event, and assure that the country’s tourism, ICT and art industries benefit directly from the events being hosted in Namibia. As such, we are pleased to endorse the KORA AII-Africa Music Awards and anticipate the positive impact it will have on Namibia’s creative economy.
It is our further belief that the KORA All-Africa Music Awards also represents a unique opportunity for public-private partnership to jointly collaborate in the delivery of a landmark event, and as such, encourage role-players in the private sector to explore partnership opportunities with the event.’ The full Media Release by the Namibian Government is available on Soundcity.tv website.
The 2016 KORA All-Africa Awards’ nomination list released via @SoundcityTV twitter account and on the koraawards.com website on the 3rd of November, 2015 saw over a 100 of the most promising and gifted artistes nominated across the four regions of the continent.
Nigerian artistes and categories they are nominated are: Reekado Banks for Most Promising Male Artist of Africa; Yemi Alade for Most Promising Female Artist of Africa; P-Square for Legendary Award; Tiwa Savage, Flavour N’abania and Korede Bello for Best Video; Lara George for Best Female – Spiritual Music; Flavour scores a second nomination for ‘Best Male – West Africa’ alongside Davido; Tiwa Savage is also nominated for ‘Best Female – West Africa’ while Bracket are up for Best Group of Africa; The trio of BNG are nominated for Best Group – Spiritual; Mavins’ ‘Adaobi’ is nominated for Best Collaboration.
It is also noteworthy that winners from every category would not only be going home with the coveted KORA plaques but cash prizes ranging from twenty thousand dollars ($20,000) to a million dollars ($1,000,000).

The mobile Internet is transforming the way that Nigeria does business

Lampe Omoyele to discuss essence of Research in PR on March...