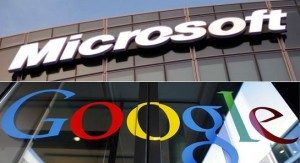 Microsoft and Google have agreed to dismiss all the patent-related lawsuits between them, Bloomberg reported, saying the two had around 20 lawsuits pending over uses of patents in mobile phones, Wi-Fi, web video, video game systems and other technologies. The companies will dismiss all patent cases, including those related to Google’s former Motorola Mobility smartphone unit but did not disclose if money was involved as part of the agreement.
The two companies had been litigating over technology innovations for five years. Google’s former Motorola Mobility unit had been demanding royalties on the Xbox video-gaming system, and Microsoft had sought to block Motorola mobile phones from using certain features.
The companies also pledged in a statement to work together in other ways related to intellectual property, including development of a royalty-free, video-compression technology to speed downloads, in an initiative that also involves Amazon.com and Netflix. They will in addition lobby for specific rules on a unified patent system throughout Europe.