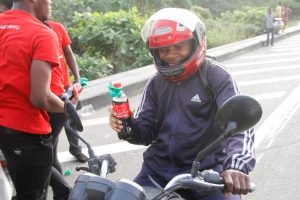 Sometimes, the smallest things can cause us some embarrassment. Like, when words fail you when you are trying to express your exact thoughts and emotions. Take for instance a boy who likes a girl but does not know how to convey his feelings without necessarily coming across as a pest. Perhaps, if he had a creative way of doing so, he just might be able to excite the girl and get her to like him back. Right?
Well, Coca-Cola Nigeria’s latest version of its popular Share a Coke campaign tagged, “Share a Feeling” is here to help consumers share their feelings better with their loved ones and friends, by enabling them creatively tell their stories using popular Nigerian phrases and catchy smileys that have been included to the personalized Coke packs.
This year’s version of the highly applauded campaign which emerged winner of 2015 ADVAN campaign of the year, is inspired by creative fans that made the campaign their own last year from wedding proposals to birthday wishes and baby announcements.
Even though last year, the campaign was focused on the personalized names on Coke packs, consumers out of the box wove interesting and creative narratives, using words they could find on Coke packs. Notable among the narratives was the first Nigerian marriage proposal inspired by the campaign from Oriyomi Lawal to Olusoga Busola using labeled coke bottles tagged “Beautiful Busola, Will You Marry Me”. That proposal rocked the internet for days, driving everyone to a frenzy, to try out their own creativity using the Coke labeled packs. 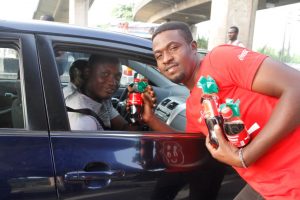 “Last year, we saw how excited people were, finding their names or that of a friend on a Coke bottle and sharing the images of their discoveries online. People literally adopted the campaigns as theirs, throwing up witty narratives coined from labels on the Coke bottle. That was quite inspiring for us,” Patricia Jemibewon, Marketing Director, Coca-Cola Nigeria said of 2015 Share a Coke campaign.
According to Jemibewon, the campaign’s spirit of generosity is driving this year’s direction for Share a feeling. She added, “What we discovered from Share a Coke is that, people were buying the bottles not just because they found their names but because they wanted to Share a feeling with family and friends. This year, we are giving consumers the tools they need to tell their stories better in their own words, using the personalized coke bottles which now include fun smileys with popular Nigerian phrases, numbering 119 that resonate with everyone across the board.”
The phrases which are English, Hausa, Ibo, and Yoruba, include also the conventional everyday slangs like, “Wa sere”, “No vex”, “Gba be” etc., and acronyms like T.G.I.F, BFF and WCW. 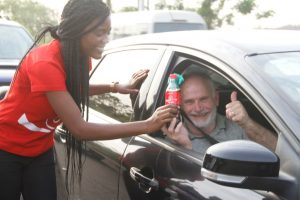 In addition to the Smileys and Phrases, the beverage giant has also included Coke Zero packs to the fun, giving consumers varieties to pick from. “By adding Coke Zero to the mix, everyone can now participate in the excitement of sharing, regardless of whether your preference is a bottle of Coke or Coke Zero,” Jemibewon remarked.
Meanwhile, for those whose name did not make the cut last year, they have a reason to smile now, as Coca-Cola has increased the number of names by twice to 1,200 popular Nigerian names.
Already, consumers have begun to take advantage of the campaign to Share their feelings. A quick scan across the various social media platform shows consumers expressing themselves using the labeled Coke packs. Wazobiatv OAP, Amaka Mensah recently shared a Coke pack labeled, “Amaka Babe Hold me” from her husband.