Over the years, Nigeria and the rest of Africa have suffered negative narratives from the developed world media that allegedly deliberately chose to tell African stories from their own perspectives. Many of them portray Africa as a country and display demeaning pictures in Africa.

This situation is also not helped by some African journalists and media content disseminators, who according to africa’s acountry website, lack the continental consciousness to think or write in African way. It is not unusual for prominent newspapers and broadcast stations in Africa to take their ‘international’ and continental coverage straight from Western publications, often ones that stereotype Africans, the site.

The stereotype by Western media which has deepened poor image of Africa even among Africans has come to be accepted by the populace. It also has implications on investment inflow to the continent as image and return-on investments are critical factors determining capital direction.

In the recent time, Africa is waking up to this reality as there are pockets of conscious efforts in different countries and in Diaspora to re-create African narrative by Africans themselves. Nigeria’s advertising industry has since joined this train.

To further the move, the creative Nigerian advertising industry is therefore dedicating the prestigious Lagos Ideas Festival, LAIF 2019 Awards to African stories. Themed Tori Tori of Laif, the award will relive the abundant African stories that will ignite the world.

This is the 13th edition of the award and “this year will be a celebration of our own culture. Instead of leaving our stories as Nigerians and Africans for other people to narrate, this time, let us concentrate on telling our stories. This informs the theme”, the chairman of the award, Steve Babaeko who is CEO of X3M Ideas said at the media conference to announce the 2019 Laif.

According to him, changing the African narrative will not only reflect on the content but on dress code at the award scheduled next month.

“Even in the dress code, it will be Nigerian. If we don’t celebrate our own, who will do it for? In terms of content, we expect higher content which the award is associated with, this is our own premier league”, he said.

This is a programme Nigeria’s Ministry of Information needs to partner to further  African narrative in line with African Union quest. As all hands are on deck to achieve this course, African Union recently signed MoU with Africa 24 Group that will see the two institutions partner to develop and disseminate content aimed at promoting Africa’s image and its narrative.

The partnership with Africa24 also reiterates the intent of the African Union to work with partners who share the common objective to popularise Agenda 2063 which include to build a positive narrative of Africa past, present and future potentials to audiences both within the continent and globally.

Nigeria as big market in Africa stands to gain tremendously from positive African narrative and it is important to see Ministry of Information supporting courses such as the AAAN Laif award. 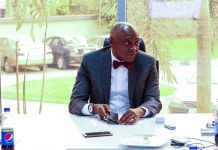