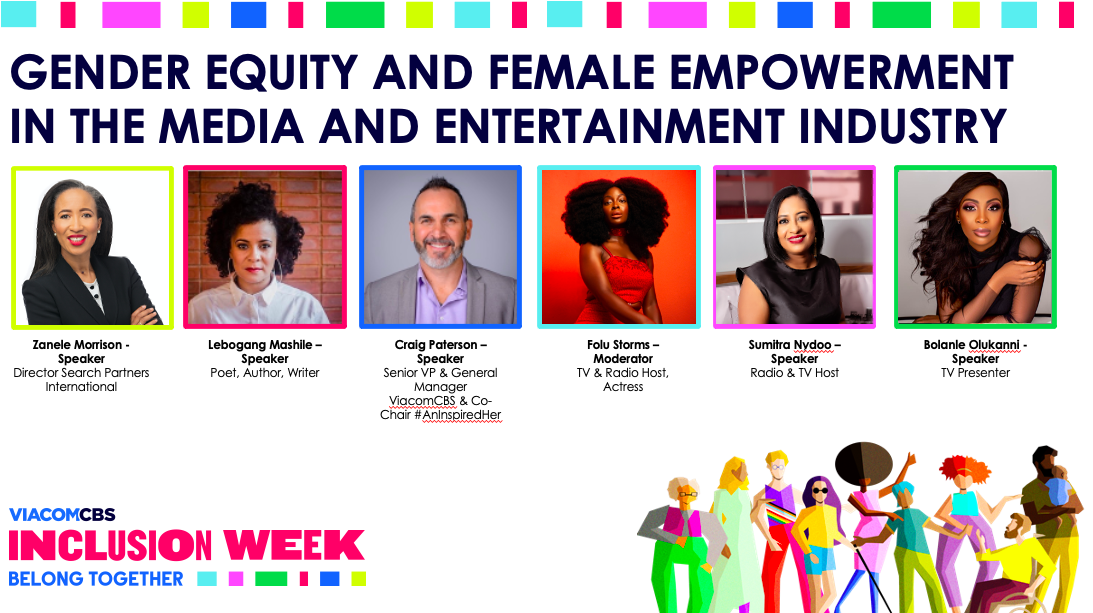 Gender equity and female empowerment in the media and entertainment industry was the focus in a panel discussion as ViacomCBS Networks Africa (VCNA) joined the rest of the ViacomCBS global family to champion the theme of Belong Together at the recent annual Inclusive Week 2021.

Contributing to the subject of gender equity, Paterson said the inclusion of men in the equality conversation was critical in achieving gender diversity in the workplace. “By definition gender equity is about fairness afforded to both men and women. While equity has always been considered a women’s issue the reality is that it is a societal issue which concerns and should engage both men and women. Men have a role to play in promoting equality and they can either be barriers or advocates creating allyship for equity.”

Paterson noted that in a recent internal survey 87% of women at VCNA indicated they would like men included on diversity forums.

“As men we need to have an understanding of how our language and behaviours could be perpetuating discrimination, disrespect, patriarchy and inequality. As Leaders, we should be role models for other men and be aware of our own potential biases and call it out when we see it in other men.”

Olukanni echoed these sentiments saying it has been her experience in Nigeria that men are absent from forums and conferences discussing gender equity yet the majority of those in power and decision making positions were men who either hinder or enable women’s empowerment.

“I’d like to see a lot of these conferences pivot to men’s conferences talking about women issues because women already know what their issues are. This is not a war; we have to learn to communicate and listen to each other for us to make progress.”

Adding another dimension to the discussion, Mashilo spelt out the differences between equality and equity. “Equality means we all get an opportunity; each person gets the same apple but equity goes beyond that and acknowledges that we are different. Maybe one of us didn’t eat last night or someone doesn’t have apples, or maybe one of us has a food allergy. It acknowledges that we are not coming from the same place, maybe someone has been excluded because they are disabled, they are a woman, or they are trans or a parent… our needs are not the same. This is fundamental in that it forces us to look at positionality and gets us away from the trap of ticking boxes into real redress.”

Morrison leaned in stating that the first hurdle towards equality was centred on numbers, getting more female representation and diversifying the workforce. “We no longer just want a seat at the table, we want meaningful participation, we want a voice and for that voice to be heard.”

Mashilo said while women have made strides in Africa in terms of rising to higher positions in both private and public offices, they still faced many challenges including gender-based violence and justice systems that discriminate against women. “We are not where we could be or where we need to be. Is this continent a safe place to allow women to reach their full potential? By and large because if you’re not privileged or educated or have access to resources then no.”

Weighing in on how companies can promote gender equity, Nydoo said it was not enough to tick the boxes and adhere to legislation when it comes to increasing female representation. “We have to put in support structures to mentor and groom them for success and ensure we have retention strategies in place to keep the talent.”

Olukanni says while she has been lucky to work for female bosses in Nigeria for most of her career, she has realised that women leaders continue to have their integrity and abilities questioned and undermined.

“In this industry we have a lot of female producers, directors and executives but the legitimacy of their positions is always challenged. Women are still regarded as commodities who use their bodies and sexuality to get positions. This is the narrative being depicted in the media. We as creators have the ability to use content to rewrite the story and change that narrative.”

Morrison agreed that there was an opportunity to remove the stereotypes of how women are portrayed given that globally 26% of the content we see in media is created by women.

According to Paterson, who co-chairs #ANINSPIREDHER Forum together with fellow Executive Leader and founder Fathima Beckmann, the forum which champions Gender Equity and Women’s Empowerment at ViacomCBS Networks Africa, the company has an actionable mandate for equal opportunity and uses various tools to measure progress and impact.

“Gender equity and women’s empowerment are core priorities and principles driven from the top not only for the Africa leadership team but also the global ViacomCBS team and is part of our performance measures and how we get remunerated.

He said ViacomCBS’ Global Office of Inclusion has a mission to foster a culture of inclusivity, which holds leadership accountable for creating, developing, promoting, and championing a diverse multicultural workforce where all employees can achieve and contribute to the company’s success.

At the end of the panel discussion, participants went into breakaway sessions to discuss tangible actions to ensure the gender equity, diversity and inclusion remains at the core of everyday operations in the workplace and industry.